The International academic collaborations are fostered with the aim of:

PCET GROUP HAS SIGNED MOU WITH THE FOLLOWING INTERNATIONAL UNIVERSITIES IN THE AREAS OF ENGINEERING, ARCHITECTURE AND MANAGEMENT

Mr. Kikuchi founder Chairman of SCCIPJapan Co. Ltd., formerly known as Learning Systems, Japan. As the first official agent of LEGO Education in Japan, Learning Systems has been running Lego schools since 1997. He was involved in developing educational curriculum used in the schools. Learning Systems then developed a unique teaching approach, combining his own curriculum and other teaching materials. Learning Systems is now managing STEM (The Science, Technology, Engineering, and Mathematics) – Robotics Education. Since 2011, Learning Systems has expanded the business overseas. As of today, more than 26,000 students in India are benefiting from the STEM-Robotics education program developed by Learning Systems. He was born in Hyogo prefecture, Japan, on October 12, 1946. Mr. Kikuchi graduated from the Department of Mathematics, Faculty of Science, Gakushuin University in Japan in 1969. After working at Nihon Unisys, Ltd. , Chuo Coopers & Lybrand Consulting (Price water house Coopers today), he became President of I.M. Corporation anothercompanyfounded byhim for ITbusiness.

Rich corporate experience of 36 years in India and across the globe of all functions relating to finance, accounts, lawand taxation helping me provide effective Vision, Supervision, Direction and Control. Rich corporate experience of20 years as Finance Head, LegalHead & CompanySecretary. 6 years Head of Finance Academy and Sr. Advisor L& D in Finance to ArcelorMittal, world's largest steel and mining company. 6 years as a GlobalCorporate Trainer, Business & Life Coach and InspirationalSpeaker Currentlyassociated with Suratwwala Business Group Ltd. As an Independent Director As a Business Valuation Professional done numerous valuations as per the requirements of the Companies Act, SEBI Regulations, FEMA, IFRS & IndASs, and other statutes. As an InsolvencyProfessional : - Liquidator for a Birla Group CompanyforVoluntary Liquidation U/S 59 of Insolvency& BankruptcyCode (IBC) 2016 Advisor & Coach for implementation of IndASs: -Training Accounting and Finance professionals for implementation of IndASs and also foraudit ofaccounts prepared based on IndASs. Head ofFinance Academyand Sr. AdvisorL& D to ArcelorMittal : - Planning and strategizing learning & development in the area of finance for the entire ArcelorMittal Group. Designing, developing and delivering offinance centric training programmes for the benefit of middle and senior levelobjectives forthe entire group. As GlobalCorporate Trainer& InspirationalSpeakerBusiness & Life Coach For corporates in more than 50 locations across the globe including in USA, Brazil, Mexico, Canada, whole ofEurope, Russia, South Africa, Asia and Middle East Trained more than 2000 people outside India on Work-Life Balance through Yoga, Pranayama & Meditation Visiting & Guest Faculty with Management Schools & Universities: - Delivered sessions on 22 different topics relating to Business Management, Accounts & Finance and Live Management at more than 20 different Management Schools & Universities alloverthe globe. Programmes on IBC and Valuation: Have delivered training programmes for: IBBI SEBI ICSI, and its RVO & IPA ICMAI and its RVO & IPA

Dr. Tairo Nomura, Adviser to SCCIP, Japan for its research and development area. He got his Ph.D from Tokyo Institute of Technology. He has also been coordinating joint research with number of research institutions both in Japan and internationally including with MIT among others. He is also Member of Japan Society of Educational Technology (JSET), Handling Board MemberofRobo Cup Junior, Japan and Executive Member of Robo Cup Junior, 2009-2013. He has written books on “Guide book of Robo Cup Junior, The basic foundations of Information and the competence of practical use of information. He is actively involved in developing curriculum for Indian schools and trains ourfaculty. Presentlyhe is working as Asst. Professorat Saitama University, Japan. He was born on 5th June 1971 in Kochi Prefecture, Japan.

Dr. Mak Jawadekar is currently an independent Pharma Professional. He worked at Pfizer Inc. in Groton-NewLondon, Connecticut,for28 consecutive years. His most recent position was as a Director of Portfolio Management at Pfizer Inc. In the recent past, he was responsible forDrug DeliveryTechnologyAssessment function involving external 'Drug Delivery' technologies. He has extensive experience in creating and cultivating external partnerships and alliances for drug delivery technologies. He began his professional career at Pfizer Central Research in early 1982, after having completed his Ph.D. in Pharmaceutics at the University of Minnesota. In February 2011, Mak was honored with an honorary D.Sc. degree from DYPMumbai University, recommended bythe President of India. His twenty-eight years with Pfizer R & D includes Solids R&D, Drug Product formulation/Dosage Form/Drug Delivery development, Clinical Trials Supply Manufacturing, Scale-up and Technology Transfer, Pharma R & D outsourcing, and Pharmacy experience. He managed several groups within R & D for many years. In the recent past, he has also been engaged in coordinating and outsourcing R & D activities with external partners. He was presented with the "M.L. Khorana Memorial Lecture of the YearAward" at the Indian PharmaceuticalCongress in New Delhi, India, in December 2001. He has presented at many professional meetings and has participated in various panel discussions and round tables. He was one of the invitees to join President Bush's trade delegation to India in March 2006. He also traveled to India with Pfizer global R & D's President, Dr. John LaMattina in December 2007 and visited 8 cities in India to assess theirPharma R & D landscape. He represented Pfizer at BioAsia 2009 with Pfizer R & D President, Dr. Martin Mackay in February 2009. He additionally served as a Vice President of Pfizer's Asia Pacific American Colleague Resource Group formanyyears.

Pune Business School has tied up with Singapore Nanyang Institute for Foreign Study Tour Program . The cost of travel and course fees and other related expenses would be borne by the students who intend to go at actual cost then. At Pune Business School, we want students to gather an integrated and global approach. To lubricate this, PBS plans and executes educational tours for its students to understand an array of different cultural, community perspectives and enhance their interest on global issues. It is important that students today are prepared for the future world with a sense of community responsibility. In that direction, we at the Business Institutes are striving to prepare our students in a manner that they are not only 'life and career today ' but are also prepared with a sense of responsibility towards the community. In an effort to create a niche of innovation, entrepreneurship, and creativity in students, Pune Business School has collaborated and partnered with Nanyang Institute of Management, Singapore and Impatech –A Tech Innovation ,Singapore to provide international exposure to its students.

PBS plans and executes educational tourto Singapore for its PGDM students
•To immerse in a suitable environment, in orderto improve theirknowledge in the shortest time possible
• To allow the students to experience a different culture and develop a betterunderstanding ofSingapore.
• To allow the students to get to know other students fromvarious countries, interact and learn fromone another.
• Ultimately, the students should be able to learn while in a relaxed and enjoyable manner.

Singapore is a country where east meets west. The mixture of these two cultures willallow students fromallparts of the world to feelat home in the environment. Being a multi-racial society, Singapore will definitely allow students to have an extraordinary cultural experience and enable themto develop a deeperunderstanding of the different races and cultures Singapore is no doubt, considered to be one of the safest countries withhighsecurity and political stability The public transport system is very well established, making it convenient for students to travel around if they would like to do so. There are many expatriates and foreign students residing in Singapore and thus, students willnot feelout ofplace in the new environment. However, some of the other programs with universities and colleges abroad will be on payable basis separately depending on the available international linkages at an extra cost to other countries like Malaysia, Dubai, U.K., Canada and New Zealand 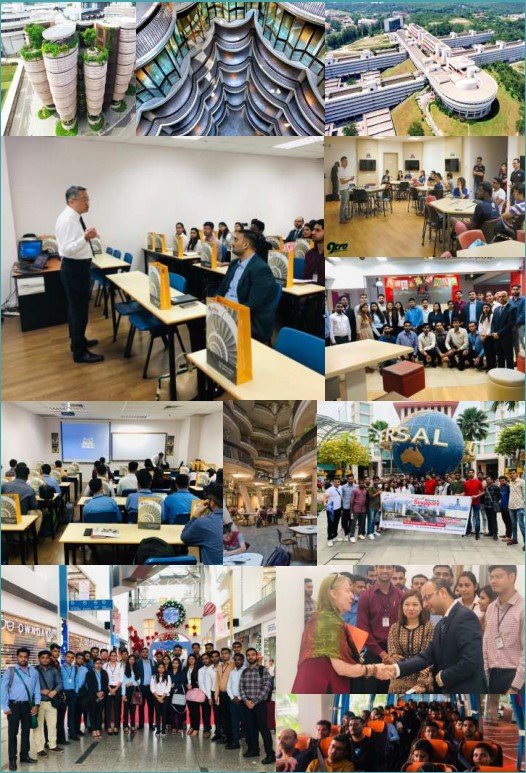